Historically it is one of the oldest occupation, something that we’ve knowing for ages. As a matter of fact, human society’s evolution started around farming, from hunter gatherers to nomadic tribes to settlers, farming is what made us settle down, so we’ve been knowing it for thousands of years. And after settling down, we developed a lust for more and then the battles, wars, trade, colonisation and acquisitions started, as a new chapter in human history for development of other human expertise, but farming remained at its core position, as we need food on a daily basis and farming is the only way to produce the food. Be it cattle for dairy, animals for meat, fishery for fishes, poultry for eggs or agriculture for cereals, fruits, vegetables, oil seeds and so on.

Then came the western world’s quest to rule the nature and declare themselves as the most beautiful creation of the God, their meeting with science or the beginning of industrial revolution. They saw the tip of the iceberg and started learning and bifurcating it into various streams like physics, chemistry, biology, botany, zoology and so many other fields, that eventually resulted into the advent of commerce, trade, money and businesses. They started expanding and roaming around on earth through the sea route, just to scavenge for land masses, conquer them, colonise them and establish trade in the name of spreading civilisation, later translated the same into development. Today, to a great population westernisation is synonymous to development, especially in Asian and African countries.

All was going on well till it was physics and mechanics, from guns to railways, rockets to airplane, automobiles to automation, but things started going haywire, when they started experimenting chemistry in life sciences (botany, zoology, medicine, biology). This was the beginning of destruction. We learnt the natural processes to tame nature and imitate the same with chemicals and synthetic processes and speed things up to take control. As it was all linked to finance, we wanted higher production, committed deliveries, good looks, good packaging and great profits. And in the quest to make profits, we didn’t even realize when we crossed the lines and started a process of self-destruction.

Today all our farms – the basic raw food industry – agriculture, poultry, dairy, fishery and meat – are all heavily infested with fertilizers, pesticides, insecticides, antibiotics, hormones, steroids and all sorts of chemicals. The harmful synthetic chemicals have entered into the food chain. New diseases have born, new issues like global warming, climate change are cropping up. We don’t even realise that it’s all a chain reaction. We killed the soil, we killed the water and the air. We did a massacre of the microbial culture in the ecology or the ecosystem that existed in the water, air and soil, by injecting them with our factory made chemical fertilizers, pesticides, insecticides, antibiotics, steroids and hormones. Our approach wasn’t holistic, but symptomatic. We farmed for a crop, and for better growth added fertilisers. Fertilisers killed microbes in soil and ecosystem suffered, as a result there were more weeds competing with the crop, so we added weedicides, which killed the weeds, but infested the plant too, this called for pests and we added pesticides, that killed the pests, but created another disease in the plant, and it goes on and on. And the chemical residue of all these got added in to the final crop, that was harvested, processed and served on the platter. Through food the harmful killer chemicals that killed the weed / pest / insect / disease, and whose trace residue was left on harvest, now entered human body and became a cause of new variety of human diseases. Now the same symptomatic treatment starts for the human body in the hospitals.

While harming ourselves with new diseases in the process, we also harmed the environment, by polluting the soil, the residual chemicals get washed with the rains and reaches the natural water-bodies contaminating the water too, and finally disturbing air as well.

Farming is not a natural phenomenon, Nature creates jungles, not farms. The best of the farms are those which are in complete harmony with nature. Because it is the nature who has to produce ultimately. All the most precious things on earth are provided free by nature, be it sunlight, water, air or soil. If we just let the nature do its job, and we only work as a catalyst, everything falls in place.

Nature has all the cures and way outs, but we need to take a holistic approach. For example, if you revive the aqua-ecology in a pond you would be making the best environment for not just fishes, but the entire aquatic life, like insects, snakes, frogs, and of course fishes, but you want to farm only for fishes. So how to weed out the rest? The Nature’s answer is add poultry – ducks, hens, quails etc. The birds will eat away all the weeds and your pond is clean again. So nature has all the answers, you just need to be a good student. 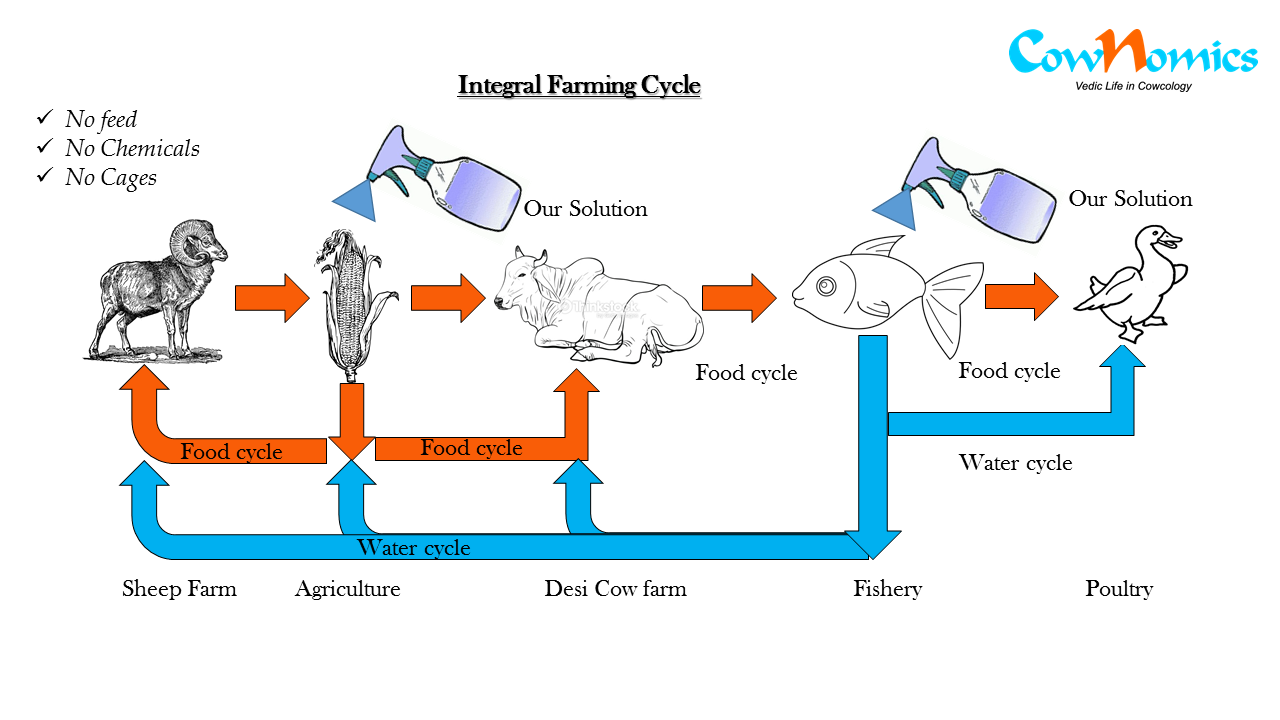 Our entire technology revolves around the basic Indian science and ideology that – “Mother Nature is Self-sustaining and Self-healing”. Nature is a closed system in which, there is no need for an external input for anything. There are no natural calamities – the activities / events known in the modern science as natural calamities are nothing but simply balancing acts of nature to full fill the void created by foolish anthropogenic activities.

All the nutrient required for plant growth are there in soil (top soil, subsoil, parent material or bedrock), using synthetic chemicals just disturb the ecosystem. Similarly, all the nutrients required by the aquatic life are there in water & soil, and the same goes true for air / atmosphere. And then we have the food chain / ecosystem – this starts from microorganisms goes till complex organisms, microbes generate food for plants, plants are eaten by the animals, dead animals are decomposed by microbes again. So whatever is taken from nature comes back to nature and the cycle goes on.

It is important to understand that;

1-     Plants stand on the intersection of the carbon cycle and nitrogen cycle. Leaves absorb carbon dioxide (CO2) from atmosphere, in presence of sunlight perform photosynthesis, absorb carbon (C) and release oxygen (O2) and that cleans the air for all terrestrial and avian life forms like animals and birds that survive by breathing oxygen (O2). However, the carbon is transport to the roots by the plants, wherein in the soil there are symbiotic micro-organisms that need carbon (C), which the give to plants in exchange of the nutrient they absorb from soil, like nitrobacter does it in exchange for nitrogen.

2-     And no plant is obese, they don’t store more than their requirement. All the nutrient elements absorb by the plants that are more than their need are released back to the soil by roots, from where the micro-organisms pick it up and the barter exchange goes on and on.

Every plant extracts a different mineral from the earth bed, every fish needs different nutrients for a better natural growth, cattle needs different minerals and birds need different food and above all everyone needs the same set of micronutrients in different volumes. But all are linked together through the food web and the micro-organisms ecosystems establishing the complete web of ecological balance.

The microbes are the first life forms and are still the key to the life on earth, and they are everywhere. Be it soil, or water or air. But like any other thing or action or event on earth, like cholesterol (LDL and HDL) in our body, some microbes are helpful for humans, but bad for plants and vice-versa. Same goes true for aquatic, terrestrial and avian life. There’s nothing, that’s good for all, but everything is good for someone. For example birds excreta is bad for birds, so it needs to get out of their body, but its food for fishes, fish excreta is bad for fishes, but good for plants. If the waste wasn’t utilized, the nature wouldn’t have been self-sustaining.

Farming is not a natural phenomenon, it’s an anthropogenic activity. But it doesn’t essentially have to be against the nature. We just need to be selective about what to farm with whom? What is the best symbiotic co-existence? And that precisely is what our knowledge / our technology is.

We just do a careful selection of the species of plants and animals, we do all the animal farming in a cage free manner, allow them to graze naturally and help them develop their natural immunity, which results into a natural carefree growth.

It’s a misnomer that the yield will drop if you go organic. Forget about the yield drop, we have case studies of increasing the yield to five (5) to ten (10) times compare to the yield of chemical farming in the same land.

Bottom-line is simple – we need to go back to roots and let the Mother Nature show her wonders, believe it, they are amazing and miraculous.

1 thought on “All about farming – agro, poultry, dairy, fishery and meat”